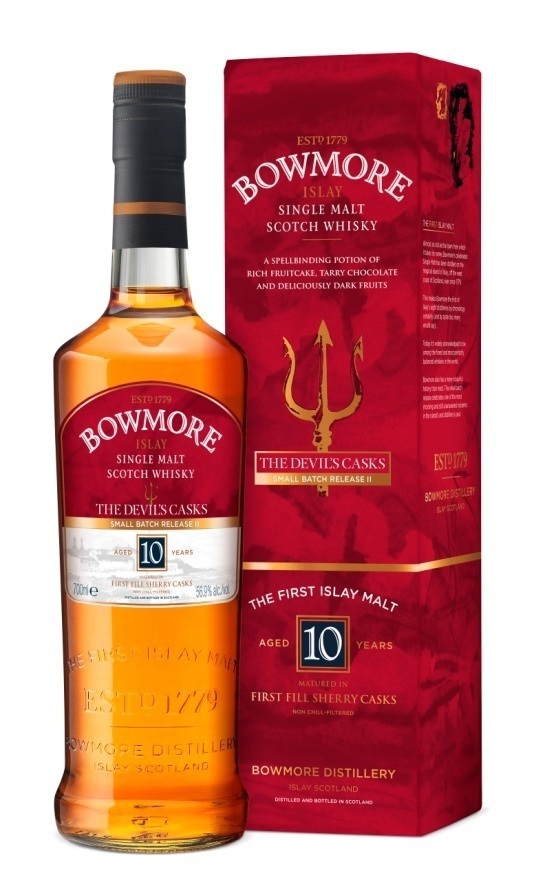 Bowmore , Islay’s first distillery, is proud to announce the  second release in its sell-out Devil’s Casks series.  Matured exclusively and unusually in the finest first fill sherry casks, the second small batch release of Devil’s Casks is still mischievous. Having mellowed under a cloak of smooth velvet and sublime sherry cask indulgence, it reveals even more of Bowmore’s devilish dark side. This small batch release is, quite simply, devilishly good! The expression gets its name from a legend nearly as old as the distillery itself. It was claimed that the Devil was once spotted and chased through the town, eventually hiding away in the distillery. After searching, the Devil was nowhere to be seen, having made his escape in a whisky barrel.

The best-balanced Islay Single Malt whisky is the perfect reward after your outdoor experience. Founded in 1779, Bowmore is the oldest Distillery on Islay, one of the Scottish isles, which make up the region known as the ‘Islands’ in the lexicon of Whisky. The other regions are the Highlands, Speyside and the Lowlands. Islay malts are famous for their characteristic smokiness and Bowmore is no exception; we carefully smoke our malt and use skills handed down from generation to generation to craft a perfectly balanced Single Malt.

Bowmore’s adherence to traditional production methods helps to shape the character of our Single Malts. We’re one of only a few distilleries anywhere which still produces its own floor malted barley, hand-turned by traditional wooden malt shovel and hand drawn machinery. For our whiskies we draw water from the Laggan River, with its rich peaty overtones, and it’s the same Islay peat that fires the malt-drying kiln.

Bowmore Distillery’s close proximity to the sea is also vital in determining the final character of our spirit. The legendary Bowmore No. 1 Vaults is where most of our whiskies spend their long lives resting quietly in the cool, dark, damp cellars below sea level, oblivious to the waves thrashing the Vault’s sea-facing wall.

Islay is the southernmost island of the Inner Hebrides, and is also known as “The Queen of the Hebrides.” Its mild climate and rich peaty soil make it ideal for creating whisky, and despite having a population of not much more than 3,000, it’s home to no fewer than eight distilleries.

Bell & Ross BR-X5 Takes Design To The Next Level →