Hong Kong’s Shaun Thong enjoyed little time to celebrate his recent Silver Cup trophy in the inaugural season of the new Blancpain GT Series Asia championship, with a move back to prototype endurance racing as part of the Taiwan Beer GH Motorsport LMP3 team in the four round 2017/2018 Asian Le Mans Series.

Joining once more team-owner Hanns Lin in the GH Motorsport Ligier JS P3 LMP3 – this year in the colours of Taiwan Beer – the pair were looking to improve on their 2016/2017 results which provided Thong with two podium finishes from the three events he contested, and a top ten finish in the championship.

“I really enjoyed my experience last year alongside Hanns, so when the opportunity came to complete the full season this time around, I took it with both hands,” Thong admitted. “I love my GT3 racing, and whilst the straight-line speed of an LMP3 is not much different to the Audi R8 I compete in both the Audi R8 LMS Cup and the Blancpain Series, the LMP3 is a purpose designed race car, complete with 420bhp V8 engine and fantastic aerodynamics, it’s a great car to drive but more physical than a GT3.”

The opening round of the 2017 season kicked off on a circuit at which Thong felt right at home, having competed for much of his motorsport career on the Zhuhai circuit – affectionately considered the ‘home’ circuit of Hong Kong-based drivers – the multiple GT3 race winner having actually claimed victory in the very first season of Asian Le Mans back in 2013 as a – then – 17-year old on his debut in an LMP2 car.

This time around though, his focus was LMP3 and as he had done all season in the Blancpain GT Series Asia, he was immediately one of the fastest drivers on the circuit running consistently inside the top three fastest cars in practice, before the team qualified a little further back in the field after a technical issue in the timed session to set the starting grid for Sunday’s 4-Hour race stalled their forward progress. 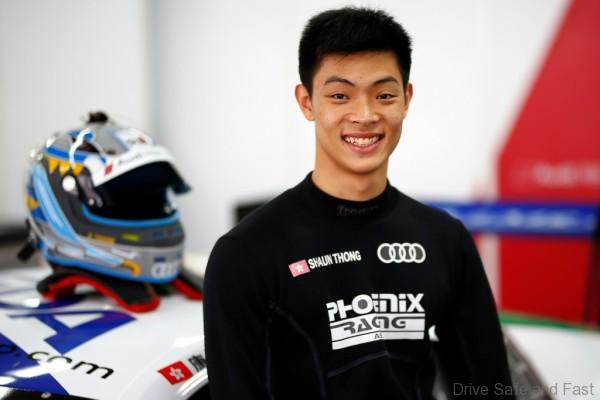 Despite starting fourth in class, Hanns Lin was quickly through to the lead of the LMP3 field ahead of the first pit stop, in the process moving into fifth outright behind the much faster LMP2 cars.

Thong then set about extending their lead as soon as he hit the circuit, but almost immediately was forced to serve a drive through penalty for a full-course-yellow infringement incurred ahead of the stop. That dropped the team back into the sights of the pole-sitting KCMG entry, which has been able to turn much faster times than the bulk of the field, and despite Thong’s reputation as one of the fastest drivers on Asian soil, the #18 entry was able to close down his lead, taking back the top spot once Thong came in for a late fueling stop ahead of the chequered flag – the #11 team crossing the line in position seven and second in LMP3.

“It was fun being back in a prototype, they’re an enjoyable car to drive,” Thong admitted afterwards. “Really second today was the best we could have hoped for short of a problem for the #18 car, it was so much faster than the rest of the LMP3 cars that it was in a class of its own. That said I’m happy that I was comfortably the second fastest guy in an LMP3 car, so all things considered, showed that we are more than capable of winning against the bulk of the field.

“Next stop is Fuji in early December, a circuit I have competed on in the past and in fact made my debut there with this team last year, so I will have had a full season of experience in the car by then. It’s a long season and anything can happen, but we’ve certainly started off with a solid result, and hope to push that result even further in Japan.”