Audi RS Q8 Gets ABT Treatment

With 591 hp and 800 Nm on tap, the Audi RS Q8 is already a formidable super SUV that would obliterate its rivals with ease. But if that is not enough, ABT Sportsline is offering a complete upgrade package to take its performance to a whole new level.

There is also something called ABT Level Control that is developed specifically to refine the air suspension system. Comfort level lowers it by 25 mm while Dynamic level lowers it by 15 mm. Lastly, the curiously named Coffee Mode brings the body down by a further 10 mm.

The 600 hp (441 kW) Audi RS Q8 is a spontaneous headturner. The impressive SUV does not only make its presence felt on the street, but also convinces on the handling course. Now it has an even more charismatic voice, thanks to the optional ABT exhaust system. An electrically controlled exhaust flap on each side of the vehicle and four active pipes create a glorious resonance. Power delivery also benefits, thanks to the integrated interference pipe and reduced exhaust backpressure. It is also a feast for the eyes: The car features a quartet of 102-mm endpipes, which feature real carbon. In addition, the world’s largest automotive aftermarket and performance parts specialist for Audi and VW also supplies a polished exhaust housing with embossed ABT logo and offers endpipe covers in glossy black for the rear skirt.

Attractive alloy wheels are essential in creating a vehicle’s coherent aesthetic. The 23-inch ABT High Performance GR in “glossy black” looks breathtaking, even on the massive SUV coupé. The strongly concave base and the diamond machined rim flange contribute to the unique design. All ABT Sportsline high-performance wheels feature one-piece manufacturing and are up to 40% lighter than conventional cast wheels. Modern flowforming technology is used for creating the High Performance GR: Parts of the cast rim base are rolled out and compressed as part of an additional production stage. This allows the rim bed volume to be reduced by up to 50 percent. This facilitates thinner wall thicknesses and thus a slim design with extreme stability. Furthermore, ABT Sportsline offers a sporty finishing touch: A rear spoiler and fender inserts made of carbon fibre, which visually emphasise the dynamic performance of the vehicle perfectly.

Audi’s air suspension also makes its contribution to the performance of the 2019 Nordschleife record-breaker, which became the fastest production SUV back then. Thanks to ABT Level Control (ALC), it can now be made even more sporty. Comfort level lowers it by 25 mm; Dynamic level lowers it by 15 mm. A further 10 mm is possible in “Coffee Mode”. Want even more performance? In this case, the Bavarian company can deliver performance upgrades* up to 700 hp (515 kW) and 880 Nm, or even to 740 hp (544 kW) and 920 Nm. Corresponding VMAX increases to 310 or even 315 km/h are also available. Up-to-date information on further options can be found in the ABT Configurator. 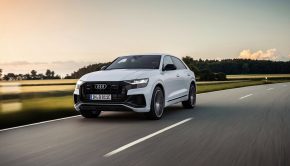