Mid-July every year marks the start of summer break in Japan and the SUPER GT is set to make a re-start towards the mid-stage of the series at what can be said as the second season opener, the Round 4 “SUGO GT 300km RACE” held on July 19th and 20th. SUPER GT at Sportsland SUGO has a tradition of being the host of series’ historical battles as well as dramatic races, and last year’s race was no different. New machines have been introduced to the GT500 class this year and that makes it even more difficult to predict how the race will develop. Will it be a race true to its reputation, “Dramatic SUGO,” once again? And, who will catch the main stream of the season? It is indeed a race not to be missed. 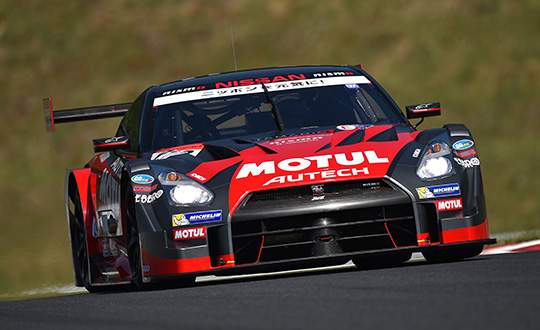 ■GT-R squad has kept a good rhythm up to this point. They would want to continue the momentum and catch the flow.

Season opener victory went to No.37 KeePer TOM’S RC F (Daisuke Ito/Andrea Caldarelli). Round 2 Fuji and Round 3 Autopolis were won consecutively by GT-Rs, No.12 CALSONIC IMPUL GT-R (Hironobu Yasuda/Joao Paulo de Oliveira) and No.23 MOTUL AUTECH GT-R (Tsugio Matsuda/Ronnie Quintarelli), respectively. Just by looking at how the season has come around to this point, the outstanding performance shown by the GT-R squad is prominent.

Team that would want to utilize this momentum and take charge of the race would be No.46 S Road MOLA GT-R (Satoshi Motoyama/Masataka Yanagida). It was Motoyama who broke the jinx of that Nissan cars (in GT500 class) cannot win at Sportsland SUGO in 2008, and Yanagida and MOLA accomplished consecutive titles in 2011 and 2012 by building a momentum at SUGO in summer. And the handicap weight of 32kg puts them in a place where they can be sufficiently aggressive in the race. Also, wearing the same Michelin tires as the No.46, which are known to exert its advantage in summer, No.23 may see a chance for back-to-back victory. 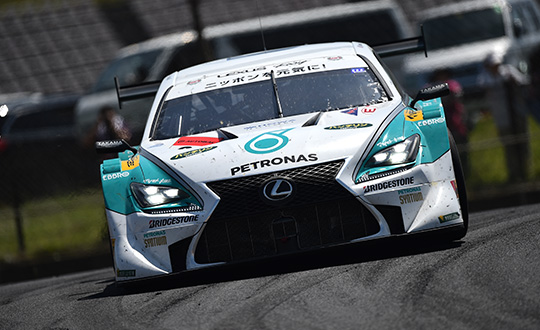 At the stage of the upcoming round, Sportsland SUGO, the GTA held its official test in mid-May after the Round 2, and the RC-F fleet was posting impressive lap times. Among the fleet, No.36 PETRONAS TOM’S RC F (Kazuki Nakajima/James Rossiter) would be the first to be raised in the topic. Since Nakajima was absent at the Round 2 and 3 due to his participation to the Le Mans 24 Hour, GT rookie Ryo Hirakawa drove for the team. Hirakawa showed outstanding performance, but then he was trapped in what considered as the rookie’s pitfall, and, thus, could not leave a good result. For this race, the first Japanese Le Mans pole-sitter Nakajima will come back to the team. He marked impressive lap times in the 1 min 49 sec mark at the official test held at Suzuka recently. The team is seen as the favorite especially with the ace driver coming back to the team.

In terms of other candidates, No.6 ENEOS SUSTINA RC F (Kazuya Oshima/Yuji Kunimoto), which finished second at the season opener, and No.39 DENSO KOBELCO SARD RC F (Hiroaki Ishiura/Oliver Jarvis) are named as the favorites as well.

Early part of this season has not being easy to the NSX CONCEPT-GT squad. However, the fleet posted the top time in three sessions out of four sessions at the official test held at Suzuka at the end of June. Moreover, the fastest time of the fleet beat Daisuke Ito’s (with ARTA NSX then) 1 min 49.842 sec, which had not been beaten since 2007,with a surprising lap time of 1 min 49.282 sec, set by Tsukakoshi of No.17 KEIHIN NSX CONCEPT-GT (Koudai Tsukakoshi/Toshihiro Kaneishi).

Of course, since the situations with car weight or restrictor are unknown at a test, it would be premature to take what was seen as the real performance, but the No.17 car was not the only car marking a top time out of the fleet as No.100 RAYBRIG NSX CONCEPT-GT (Takashi Kogure/Hideki Mutoh) also marked a session top time, so there sure was a momentum in the fleet as a whole. Nonetheless, a dramatic race like last year, where problems hit top running cars one after another and, at last, steady runner ARTA HSV-010 GT turned victorious, can repeat at SUGO with a great chance, therefore, the possibility of first win for NSX CONCEPT-GT is not too low. 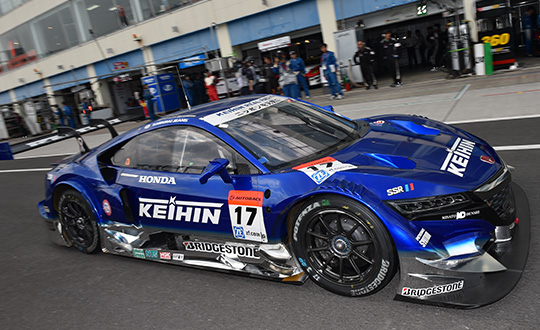 ■Keep your eyes on the hybrids in GT300 class. SLS and Z4 should also be watched closely. 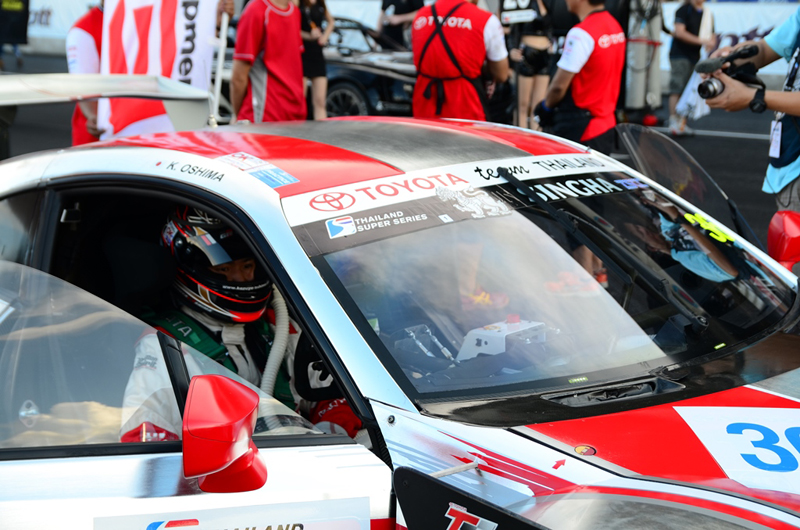 With No.4 GOODSMILE HATSUNE MIKU Z4 (Nobuteru Taniguchi/Tatsuya Kataoka) winning two straight races, everybody had in mind that the FIA GT3 cars were ahead of the game, but the Round 3 was a head-to-head battle between No.55 ARTA CR-Z GT (Shinichi Takagi/Takashi Kobayashi) and No.61 SUBARU BRZ R&D SPORT (Kota Sasaki/Takuto Iguchi), which eventually won by the CR-Z.

At last year’s SUGO, ARTA CR-Z GT won back-to-back from the previous race. The track layout is said to be advantageous to the hybrid cars. Indeed, although the pole went to BRZ, there were three hybrid cars, ARTA CR-Z GT, MUGEN CR-Z GT, and PRIUS, in the top four during the qualifying.

Then, the three hybrid cars, ARTA along with No.0 MUGEN CR-Z GT (Yuhki Nakayama/Tomoki Nojiri) and No.31 OGT Panasonic PRIUS (Morio Nitta/Koki Saga), may become the center of contention for the top place once again this year.

Joining them would be the No.61 car that fell short and finished second at the previous round. No.11 GAINER DIXCEL SLS (Katsuyuki Hiranaka/Bjorn Wirdheim), which, despite having a chance to win, had to settle with a podium finish in three consecutive races, is another team most likely to be in the top group. Teams trailing behind the above top runners could be No.3 B-MAX NDDP GT-R (Kazuki Hoshino/Lucas Ordonez) and No.7 Studie BMW Z4 (Jorg Muller/Seiji Ara).

BMW Z4 is showing impressive performance this season, and, with the delivery of the new model for this season, No.60 TWS LM corsa BMW Z4 (Akira Iida/Hiroki Yoshimoto) achieved 7th place finish and picked up championship point at the previous race. The combination of great veteran Iida and attacker Yoshimoto is working out superbly, thus, they deserve the attention at this event as well. In terms of others, Porsches can be interesting if the weather gets unstable.

With the season entering the mid-stage, cars with severe handicap weight have started to appear like the top ranking GOODSMILE HATSUNE MIKU Z4, GAINER DIXCEL SLS, etc. If not winning here, then must pick up some points. Some teams have to fight with different strategy than others. It would make it more interesting and exciting to watch the GT300 class by considering the situations of different teams. Round 4 SUGO marks the beginning of the 3 mid-summer races. It is no doubt an important race of the middle stage of the season. Summer break as well as 3-day weekend are a great opportunity to see the SUPER GT at the circuit as well as via live broadcast on J SPORTS, so please do enjoy it.

Is NASCAR Confirmed To Be Going Electric Soon? →