In his speech, Nakahigashi related that IHM was established in 2007 with the purpose of fulfilling the growing needs of local customers and responding to the increased market competition. Since its establishment, IHM has launched many Isuzu models. In the last decade, the company has commercially produced nine vehicles, ranging from the N-series to the F-series, which have also kept abreast of regulatory requirements in Malaysia.

IML Chairman Hosoi said that Malaysia is an important market for the Isuzu Group. With proven, reliable and durable vehicles, the ISUZU brand has been well received in Malaysia and has achieved the No. 1 market share in the truck category for three consecutive years; attaining a dominant market share of 40%. 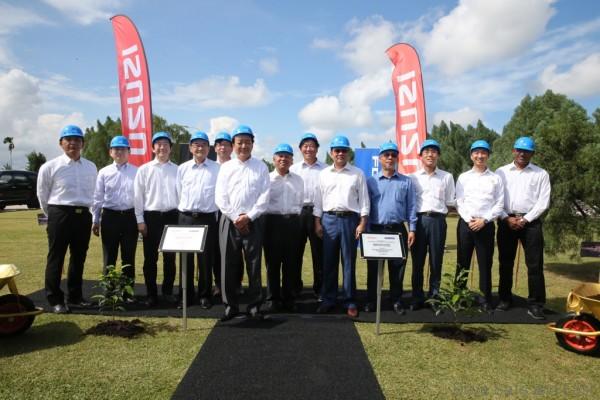 Dato’ Sri Syed Faisal said that he was pleased with the growth that the Isuzu brand has charted over its more than 30 years in Malaysia. Each year over 10,000 ISUZU vehicles are registered in Malaysia, and IHM responded to this growth with the opening of the newest flagship facility in Malaysia earlier this year in Shah Alam.

“The opening of such centres will enable the brand to offer additional support to not just the dealer networks, but also to the growing customer base – presenting them with efficient and meticulous after sales service,” said Syed Faisal.

This centre also doubles up as a training ground for new mechanics to obtain the ISUZU i-Mec certification, which is an internal specification designed for mechanics handling ISUZU vehicles.

IHM also celebrated its 100,000 unit completion in February this year, marking another milestone for IHM in less than 10 years of its establishment. The 2017 model of the popular ISUZU has also been named as “the undisputed King of Cargo” by the local media.

The ceremony continued with lunch, and followed with a walking tour of IHM’s facilities in Pekan. A simple tree planting ceremony was also held on the grounds of the facility to commemorate the milestone.