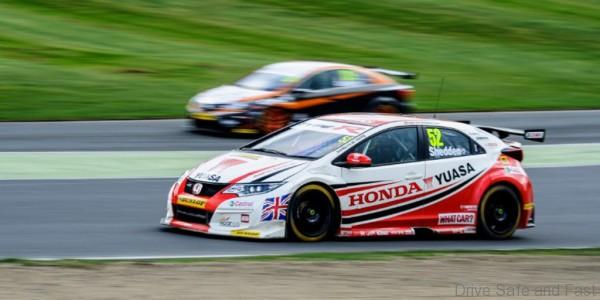 Gordon Shedden won the second race of the British Touring Car Championship season at Brands Hatch by 0.040s ahead of Andy Priaulx, with Colin Turkington in third. After a late lunge from Priaulx, Shedden held on to win for the first time on the Kent circuit’s Indy circuit by the smallest of margins, following Jason Plato’s late retirement from a comfortable lead. Plato looked well set for victory from the moment the red lights went out, as he quickly pulled away from Rob Collard, who once again made a lighting-quick start to jump into second. Squeezing past teammate Priaulx, Collard’s overtake left Shedden room to squeak back through ahead of Priaulx, in arguably one of the most important moments of the race. Plato’s lead at the front was aided significantly by Collard who, having won the first race of the day, began to struggle with maximum ballast and soft tyres. Shedden made a move on the West Surrey Racing driver into Paddock Hill on lap three, with Priaulx following through. Collard slipped further back the next time round with Turkington also getting past, but backing up Árón Smith and Jack Goff, the latter tapped Smith into a half-spin at Graham Hill bend, with the pair dropping down the order.

By the time that Collard had dropped out of the top ten, Plato’s lead was as big as 3.8s, with a fight between Shedden, Priaulx and Turkington quickly developing for the final two podium positions. The trio remained line-astern until lap 20 when Priaulx made a lunge on Shedden at Clearways. The Scot was forced sideways by the move, but kept his foot down and the pair continued side by side along the main straight, before Priaulx moved ahead through Paddock Hill. At that very moment, Plato had gone off into the gravel in front of them with an apparent puncture, but with Priaulx running wide, he relinquished the lead as Shedden dived back inside the BMW at Druids. Having dropped Turkington, the pair then looked set to remain in formation until the flag, but on the final lap Priaulx made one last attempt to lunge past the Honda having both just lapped Derek Palmer, but Shedden held his nerve on the outside to claim the win, which was also his team’s first with the new Civic Type R model. 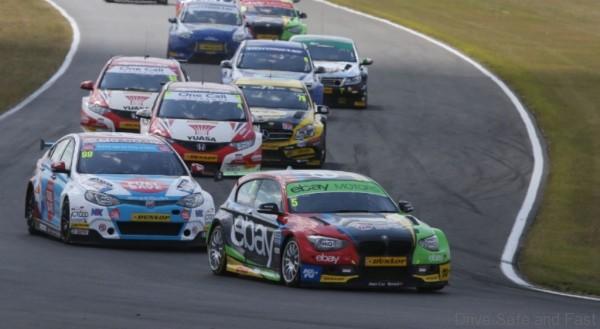 With Turkington in third, Adam Morgan had a trouble-free run to fourth place. Having started in ninth, Morgan fended off Andrew Jordan in the closing laps to claim a strong result in his Mercedes-Benz A-Class.

Tom Ingram also had a productive run to sixth, ahead of Sam Tordoff, Matt Neal and Goff who recovered after his incident with Smith. Rob Austion finished tenth and will start the third race of the day from pole having drawn his number from the reverse grid selection.